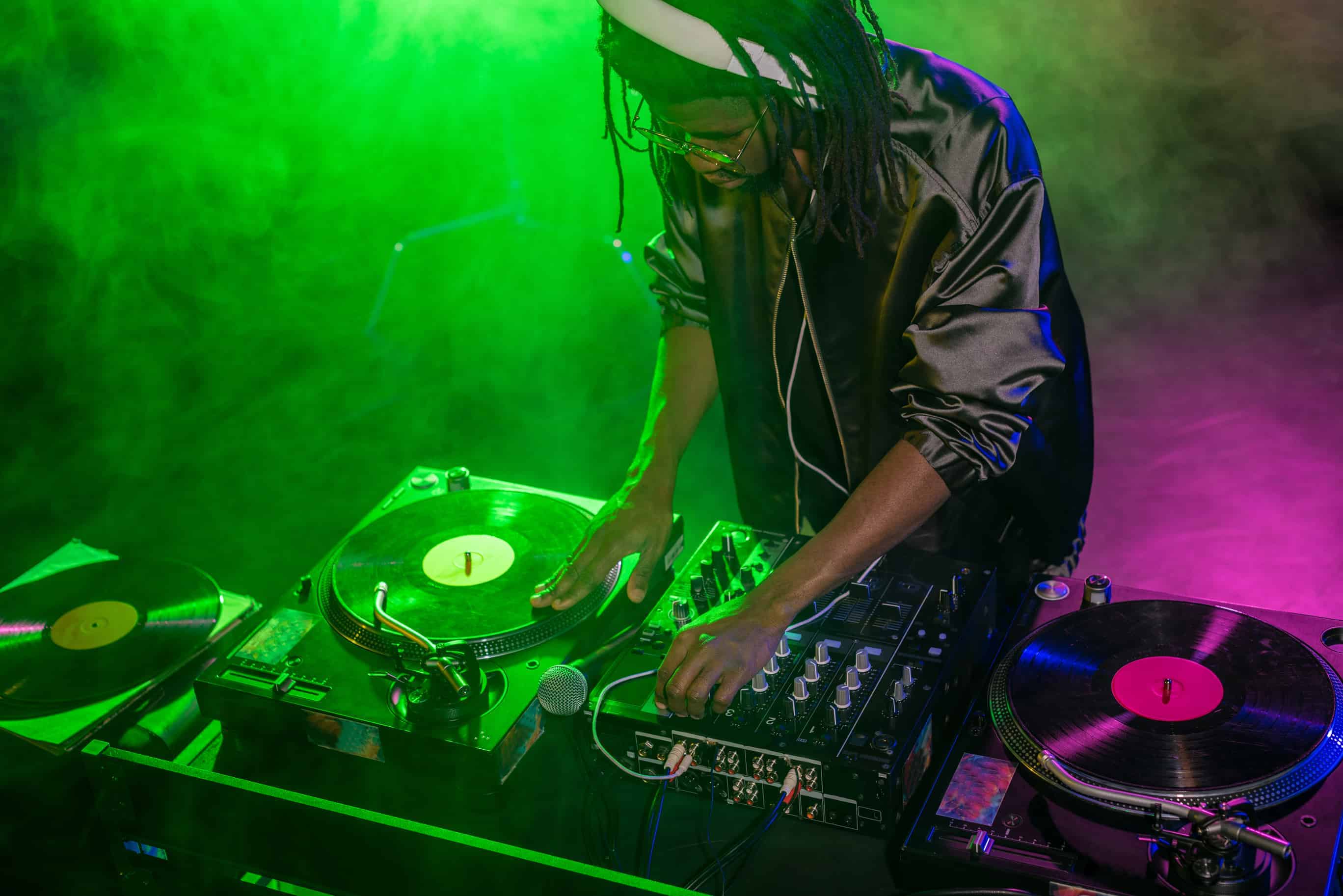 Plenty of people might have heard the term ‘DJ’ before, but what does a DJ actually do?  What is it that they can bring to your event or celebration – is it more than just playing a few tracks here and there?  Generally, yes – a DJ does much more than many people assume!

In this guide, we’ll take a look exactly what a DJ does, why they do it, and what you can expect from them.  Some DJs play to millions of people all over the world, and even take on the global charts – others, meanwhile, present radio shows and entertain at private events.

With that in mind – what does DJ stand for?

While the DJ meaning can vary depending on the type of work they do, the name comes from the same definition.  DJ is short for ‘Disc Jockey’, which basically means ‘someone who plays discs’. The days of spinning discs and vinyl may be somewhat behind us now, but you’ll still find plenty of club DJs breaking out records every once in a while.

Many DJs have moved on to digital formats.  The dawn of services such as iTunes paved the way for easier playback at venues and events.  However, the work of a DJ has otherwise not really changed too much. A DJ is someone who plays music, whether from a playlist or on request, to entertain others.  Simple!

It can sometimes get confusing as to who is really a ‘DJ’.  As stated, anyone who plays music for others can be considered a Disc Jockey!  They don’t have to be creating their own mixes or playing chart hits to qualify for the name.

However, it’s worth remembering what the different types of DJ role are.  The DJ definition is actually pretty flexible.

Sometimes called mobile DJs, these entertainers will play at private or public events on request.  They generally hire out for weddings and dances, and will have set playlists of popular tunes ready on standby.  Many event DJs will rely on digital music, however, they can switch back to older formats on request. Some event DJs can even take requests and set up karaoke evenings.

Club DJs are those who specifically mix and perform music to play at nightclubs and bars.  Often, they will create their own mixes and will look for fresh, unique sounds to play to their public.  Many famous DJs first started on the club scene. It’s a very creative job, particularly as there is always a thirst for new tunes and mixes of club classics.

Radio Disc Jockeys, meanwhile, play music which can be heard via radio.  Simple! However, the role of a radio DJ is very different from the roles discussed above.  A radio DJ will be required to present a show to listeners, to control playlists, and to make sure that a program stays on air and runs smoothly.  In some cases, they will take calls from listeners and even host chat shows.

What a DJ Does

While the basic work of a DJ is simply playing songs, there is often a little more to it than that. Everything you need to know about how to become a DJ is here, but DJ songs are not always those you’d find on the streaming charts. DJs need to have a keen knowledge of music, across a wide array of genres. They’ll also need to be technically proficient in playing music, mixing songs and setting up playlists. It’s not as easy as it sounds.  While a DJ won’t create their own songs, they will be depended on to build specific mixes and lists. Otherwise, you could argue that a music streaming platform could do their jobs for them. This isn’t the case!

Playing to The Crowd

A DJ has to have a keen ear for what their public wants.  This not only means building the right playlist, but also making sure that music seamlessly blends together, with songs of similar style and tone flowing in and out of one another.  The way music is played can have a real impact on the atmosphere. It’s not just about what’s being played, but how it is being played!

What does a DJ do apart from playing music?  For one thing, they need to make sure they keep a close eye on their DJ equipment and how it is performing. They’ll need to make sure the software, hardware and speakers they use are all playing at the right audio levels, and that the audience can enjoy themselves without being deafened.  A seasoned DJ will be able to create and play lists which fit certain audio levels and EQ profiles, which again, can go a long way in helping to create and maintain a specific mood or feeling.

DJs, too, should be ready to communicate with the crowd.  A good DJ will be confident, charismatic and open to crowd responses.  They can also be relied on to make announcements, for example at weddings or school dances, and should also be open to requests.  The best DJs have a fantastic rapport with the public while making sure that they keep professional at all times. It’s a balance that can be learned over years of experience on the job!

No matter the DJ meaning, the work of a Disc Jockey is one which can be surprisingly intricate.  The best performers will keep in touch with DJ news, purchase the best equipment, and will pay attention to what their audience likes.  After all, without receptive listeners, they will have no one to play to! With that in mind, the work of a DJ goes on far beyond an event or two.  There is a lot of background work with playlists, equipment upgrades and general research.

DJs are some of the hardest-working people in the entertainment and music industries.  A fantastic DJ will know how to play to the biggest crowds, as well as which equipment and playlists will deliver the best results.  It takes years of skill and practice to become a brilliant DJ!