by Ben Owen
Previous
Next

Pioneer is a brand which never fails to surprise us.  The RX2 has been around for a few years now, but the brand has taken to innovating a product that’s a class above its predecessors.  It’s a solid controller which, while bulky, is likely to appeal to people who want to move into the clubs.

For the time being, however, it’s likely a good idea to keep the RX2 at home.  It should help aspiring DJs hit the ground running with some of the more complex effects and touches expected of them on stage.  Therefore, if you are looking for a good leg-up into the performance scene, there are few better options you should be taking.

Pioneer, however, does provide a vast array of other systems worth looking into.  Consider the RX2, but only if you know what you’re looking for! 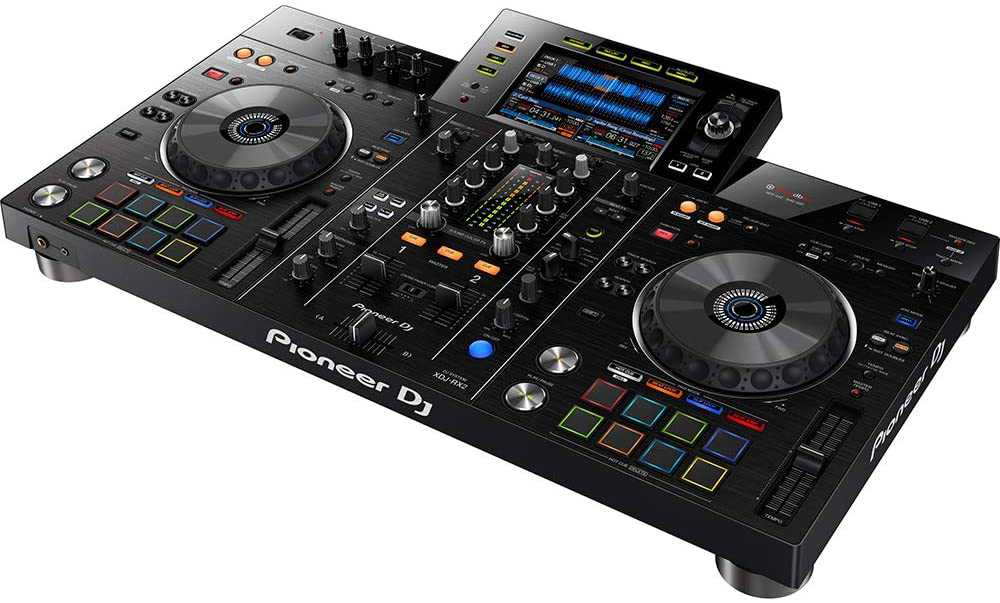 There are plenty of DJ controllers and mixers out there which do just about everything.  However, there needs to be a good balance between accessibility and the number of features available.  Pioneer always seems to do well in this regard, and the XDJ RX2 seems to be a good stepping stone for home DJs looking to branch out into the club scene.  This controller is a great all-rounder and it seems to be a firm choice for people who don’t want to have to pay out for separate modules.

It’s a standalone system, which means it is likely going to appeal to users who don’t want to have to muddle around with PCs and laptops.  This is a good thing in a day and age where DJs need to become more portable and more flexible. Why should you have to tie yourself down to a computer?  Demanding a system that does everything you want it to straight out of the box isn’t always a bad thing.

Pioneer’s a name that many people trust.  The XDJ RX2 is the latest in a long line of innovations, and it’s therefore worthwhile considering how far the brand has come.  If you already work with Pioneer tech, then you may well find that the XDJ RX2 gives you a lot of support, with a few necessary tweaks on top.  However, it’s worth digging deeper and seeing just how this controller works in practice.

First impressions here are pretty positive.  To the naked eye, it seems that there is plenty to take away from the XDJ RX2.  The touch screen is bold and obvious, and what’s more, the performance pads have been enhanced from previous controllers and systems.

One of the first things you will notice about the Pioneer XDJ RX2 is the fact that it seems to be a bit of a Frankenstein’s Monster.  It’s clear that Pioneer has brought together all of its best bits in a greatest hits package of sorts. Everything is clear and easy to find, and as mentioned, the touchscreen alone is big enough to appeal to plenty of people from the word go.

Pioneer systems and controllers are replete with plenty of features, but anyone new to standalone mixers and controllers may find the sheer amount on display here to be a bit overwhelming.  Then again, anyone moving from a mix of different modules and systems will likely find the design to be pretty refreshing. It all depends on which angle you look at things from. 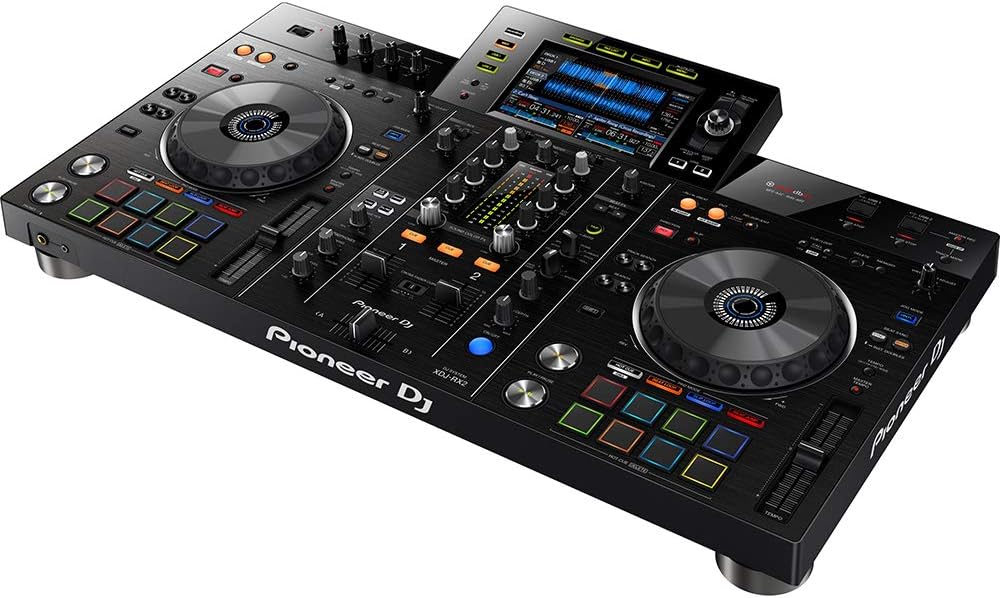 From the offset, you can tell that the unit is made from plastic, but that doesn’t mean it is poor quality.  If anything, the unit is pretty hefty and robust. That should mean you can expect the system to get a good knock or two here and there, and you won’t need to worry about it getting damaged too easily.  The sliders, dials and pads are all variously well-built and easy to use, too. Therefore, it shouldn’t be too difficult for you to get used to.

Quality build in a DJ controller, especially in a standalone unit, is everything.  If you’re going to take the DDJ-RX2 with you on the road, you’re going to want to know that it will survive journeys there and back again.  Pioneer is at least a name that many DJs will know is synonymous with great quality tech. The DDJ-RX2 has clearly arisen through years of painstaking design, which of course means that you should expect a good quality system which will support you at home and away.

The jog wheels are nice and tight, and it’s safe to say that the overall look of the unit impresses, too.  There is nothing here that raises alarm bells. It has a professional, authentic sheen. The touchscreen itself is big and bold, and that tech alone should appeal to many people who are tired of having to fumble around with screens and LCDs that really don’t live up to their expectations.

Overall, you can expect a good quality experience from Pioneer, and we’ve seen lower quality controllers on the market.

The Pioneer XDJ RX2 is clearly designed to be extremely intuitive.  While anyone new to this kind of tech might find the look of the unit to be a bit muddling at first, it’s actually very easy to adapt to as you go along.  It’s the sort of controller that grows with you, meaning that we definitely recommend a hands-on approach, especially if it’s your first time moving to a standalone service.

The fact that there are double the pads available on the RX2 from the standard RX is a definite plus, and a tick for ease of use.  If anything, this boosts ease of creativity. The very nature of a standalone controller is that you don’t have to mess around with any complex bits and pieces.  The RX2 understands this, with a decent central mixer and an input/output system that’s hardly going to tax you. It might not be the best choice for beginners, but what the system does offer is a good launchpad for anyone moving from modular control to something a little more streamlined.

The touch screen makes things super simple, and the fact that you get a licence for Rekordbox included in the package only helps to make things sweeter.  It’s a true plug-and-play device, which is something which might be growing fewer and further between in the wider market.

There are stacks of great features on-board the RX2.  As mentioned, you’ll benefit from a central mixer and a three-band EQ, as well as two solid jog wheels, clearly taking notes from the previous iteration in the sense that Pioneer hasn’t changed anything in desperate need of a fix.

The FX are easy to find, and the dials are clearly mapped out for even the newest of rookies to easily get to grips with.  You can throw in three inputs per channel here, which is huge compared to other controllers of a similar nature. The fact that many of the filter and tag functions are far away from the central mixer in this model, too, is a good thing.  It’s clear that there has been plenty of effort put into the rethinking of the UI.

The touch screen will let you manage and manipulate the waveforms from both decks under your control, which of course means that you won’t need to fuss around with any kind of DAW to make slight edits.

It’s also very easy to just plug in a USB stick and to load files to manipulate and manage.  For example, the RX2 will adapt to files as diverse as WAVs, MP3s and AIFFs without any kind of trouble.  The whole concept of plug and play is taken to heart here – and that’s a good thing.

On the whole, RX2 offers a solid system which will appeal to plenty of DJs at varying skill levels.  The sheer number of features and functions available might boggle some users right away, but it really is a standalone controller tour de force.  The sound quality is great, meaning that you can easily plug into various speaker outputs and listen to your mixing without losing any of the crispness.  You can plug in via laptop or PC if you really want the DAW experience, but we wouldn’t necessarily recommend this.

The jog wheels, as mentioned, are nice and easy to get used to, and the learning curve on the scratch is pretty low.  That being said, the RX2 is far from being a beginner’s controller. It simply brings together a stack of great features in a way that is really intuitive and appealing.  Even pros and seasoned DJs aren’t going to be looking for systems that are needlessly complicated.

RX2 performs well for those home DJs who want to eventually take their mixes on the road.  However, the sheer bulk and weight of the machine may well hold people back. Therefore, it could be a good stepping stone, of sorts, between a beginner controller and a more sophisticated system.  It’s certainly likely to be more appealing in terms of immediate cost than a more complicated setup. 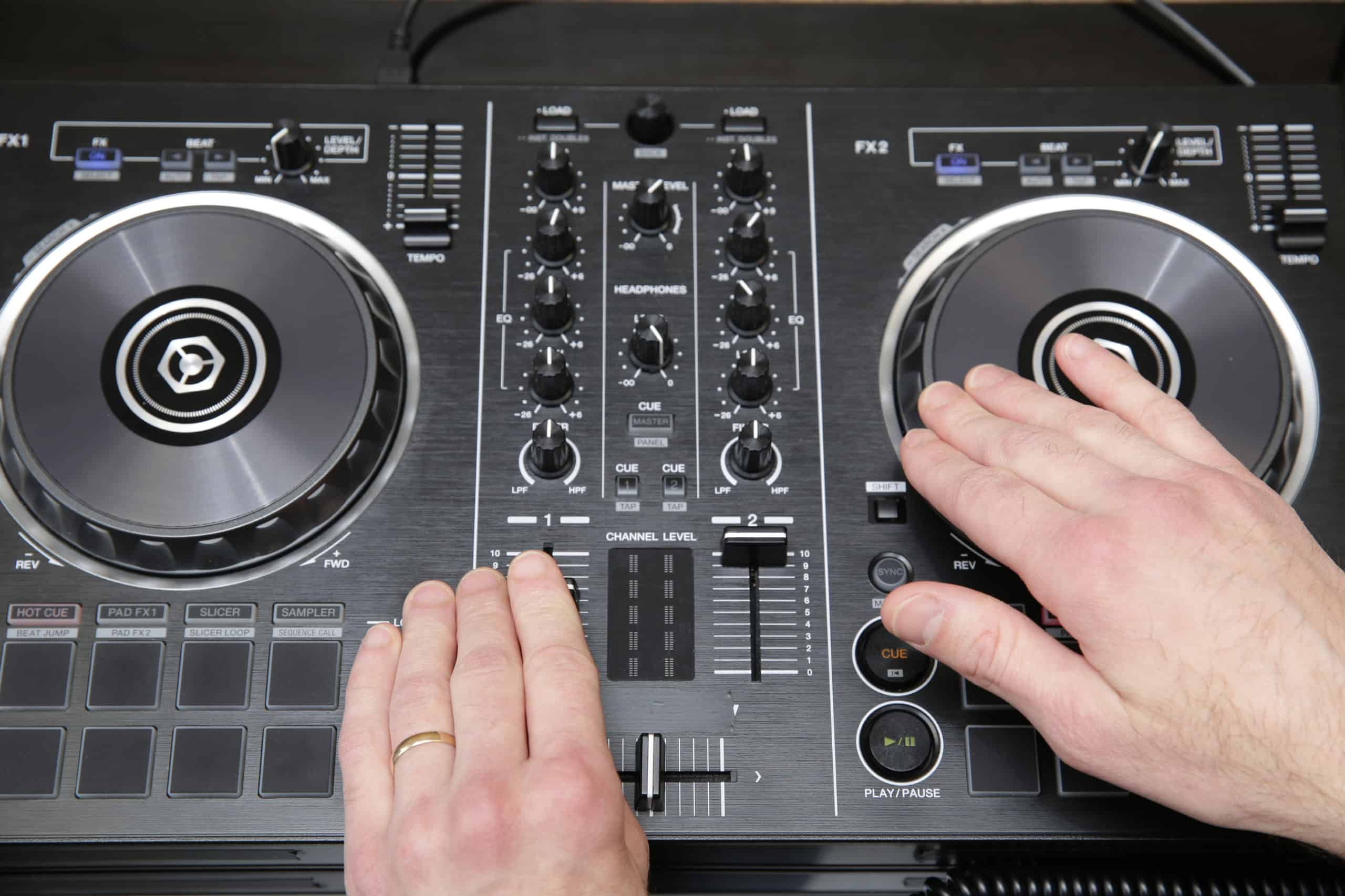 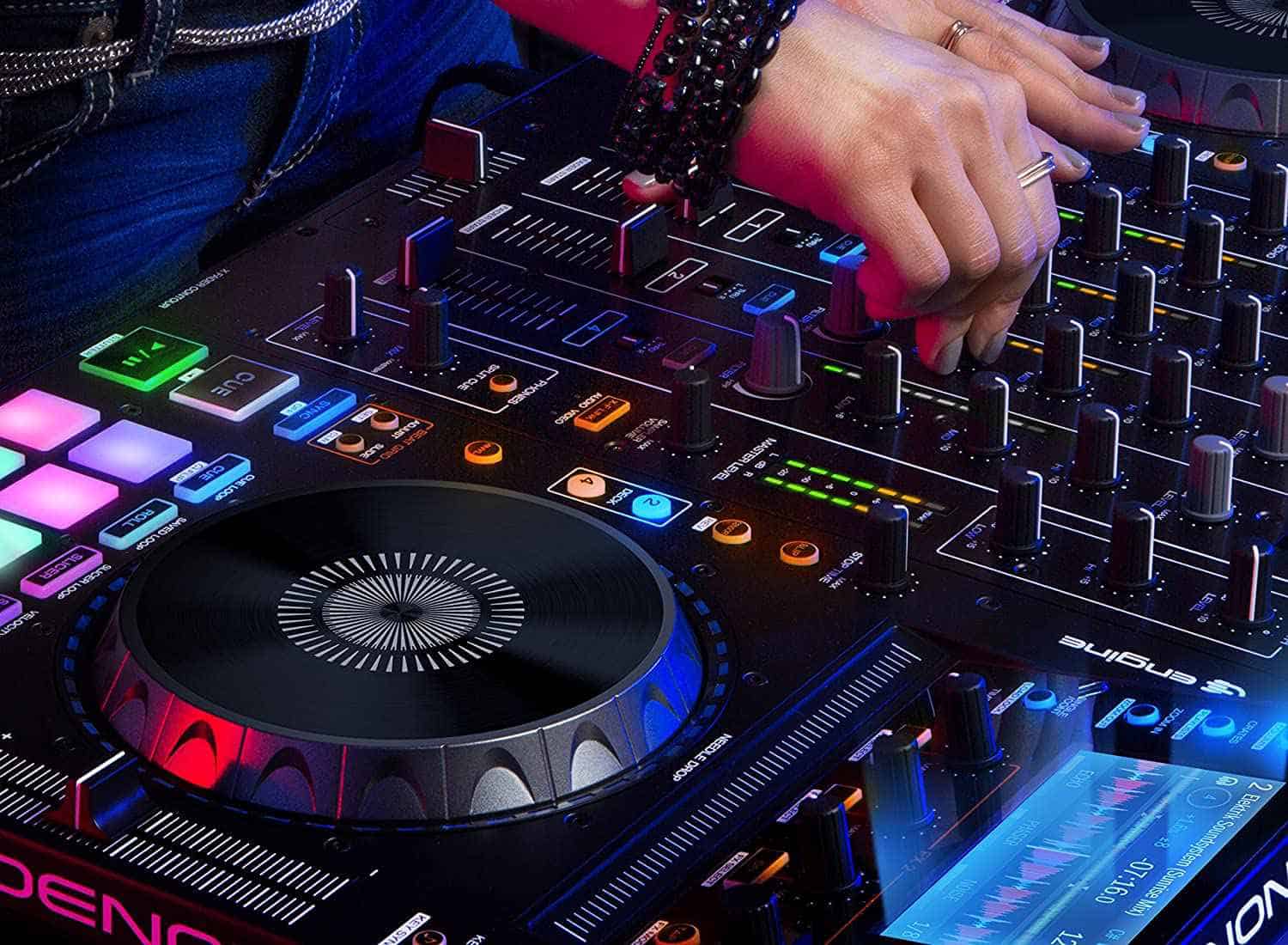 How To Choose The Right DJ Controller 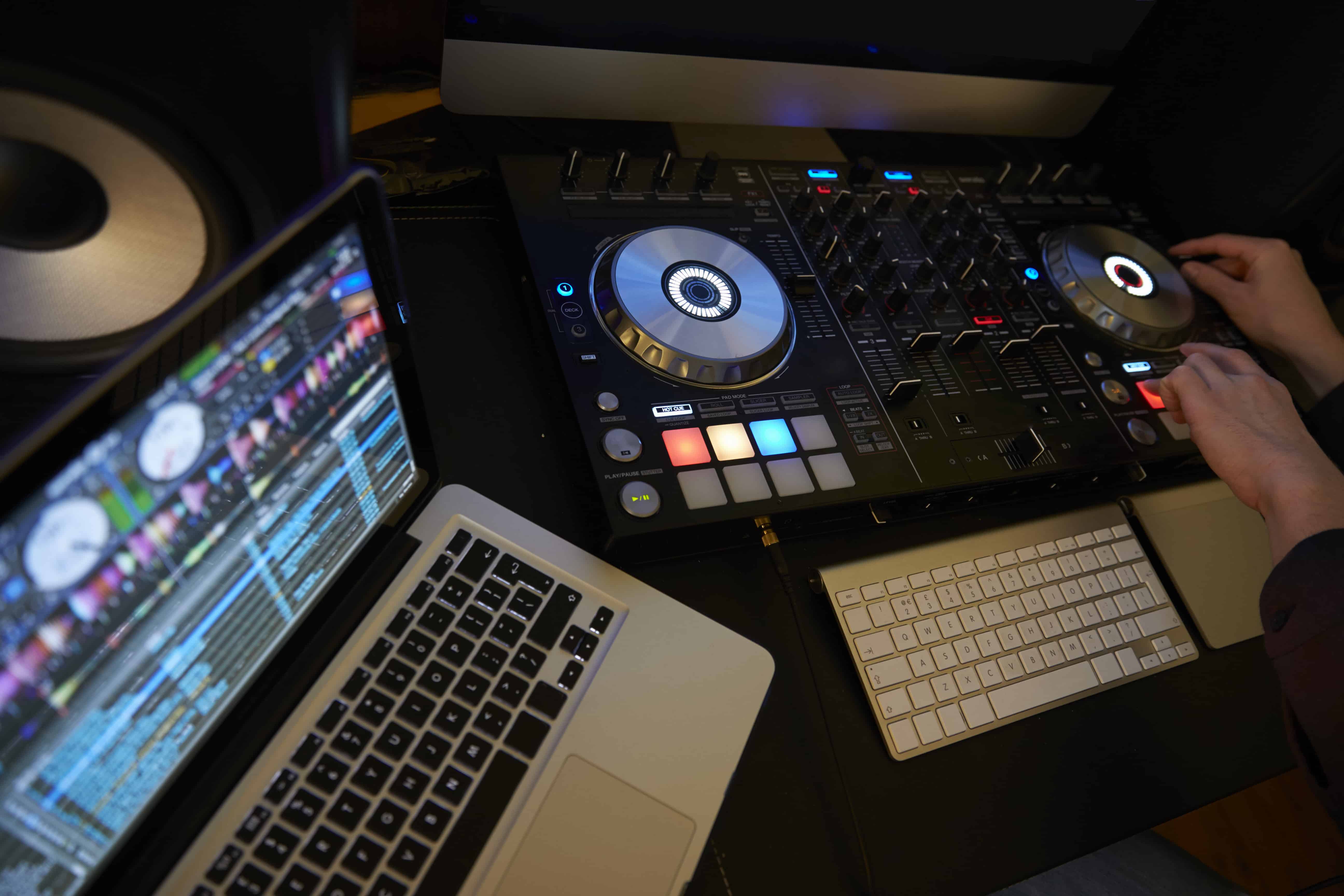 What DJ Controllers Are Compatible with Traktor Software?

Read More »
Scroll to Top
We use cookies to ensure that we give you the best experience on our website. If you continue to use this site we will assume that you are happy with it.OkPrivacy policy